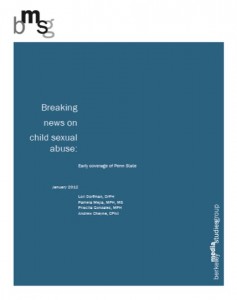 First, the good new – institutional accountability was a big part of the media story:

The attention to Joe Paterno, in sports and general news, was also attention to what he—and what others with authority at Penn State—did not do. In addition to the intense focus on Sandusky and Paterno, however, the first week of coverage also introduced a story about institutional accountability. This is unusual and important. The personal failing of Sandusky for committing the alleged abuse and of Paterno for not doing enough once he learned of the accusation were consistently present in the coverage, so much so that the coverage often seemed to be more about the downfall of Paterno than about Sandusky or child sexual abuse. But the news also calls out the University for its failing as an institution. This broader perspective was all but absent in our earlier study of typical reporting on child sexual abuse.

While the issues were named, media coverage did not focus on the potential solutions such as prevention.

As we found in our earlier study, discussions of how to prevent child sexual abuse were virtually absent from news coverage. In the Sandusky coverage, nearly one-third of the general news included a mention of a potential solution or policy measures to reduce or prevent future abuse, and only 5% of sports news did so. The most frequently named solutions focused on individuals after the fact, such as reporting abuse. There was some discussion, though minimal, about broader societal prevention strategies such as changing cultural norms so we can talk about child sexual abuse and make it unacceptable.

This report helps us consider the lessons learned from the media coverage and plan for how to continue to improve focusing the story on how to prevent child sexual abuse. The report has recommendations for child sexual abuse prevention advocates and report. Click here to see the full report.