Skip Navigation
By PreventConnect on April 2, 2012

Not in Our School: Tools to Create Inclusive Environments & Stop Gender-based Bullying

This is a guest post from Becki Cohn-Vargas, director of Not In Our Schools. 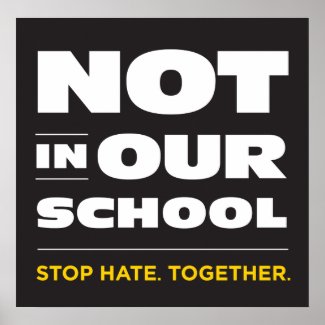 Positive behaviors, like negative behaviors are contagious and can spread through social networks. This is a hopeful sign in the wake of the urgency to address the growing trend of sexual harassment, bullying and intolerance. If we are going to find sustained solutions to these issues that have devastating consequences, students themselves need to be in the driver’s seat.

We need to turn bystanders into upstanders who stand up for themselves and others. Students can learn to reject comments such as “that’s so gay” and “you throw like a girl” and speak up instead of egging on a fight. They can learn to refuse to participate in spreading a hurtful video or text with words such as slut or ho.

Not In Our School (NIOS) is a growing network of schools that mobilizes students to be upstanders who take action to create a climate that reflects the values of safety, tolerance and inclusion in these ways:

Where does the urgency come from? In three horrifying hate crimes, high school students murdered a transgender Latina youth in Newark, Calif., in 2005; a Latino man in Patchogue, New York, in 2008; and an African-American man in Mississippi in 2011. As many as 20 people were involved or stood and watched the gang rape of a 15-year-old girl outside a Richmond, Calif., high school homecoming dance in 2009. Every day, news outlets report cases of youth who are bullied because they are perceived to be gay. Young people report that relentless bullying can lead to serious emotional problems, multiple school absences and higher risk factors for suicide.

These incidents have raised national awareness of the need to address unsafe school environments and bullying. New anti-bullying laws in 48 states require schools to take immediate action regarding bullying. While it is significant that society-at-large and school leaders are taking the issue seriously, recent meta-studies have found that many anti-bullying programs are ineffective in alleviating bullying. In many cases, the programs are implemented in one-shot campaigns with a superficial approach that demonizes bullies and oversimplifies the problem.

From Bystander to Upstander
New research from sociologists Robert Faris and Diane Felmlee from UC Davis found that approaches to bullying and harassment have a better chance of success if bystanders, who make up the vast majority, are the focus of efforts to shift social norms. They found that the most popular and least popular students are not the main bullies. Rather, students seeking to move up the social ladder engage in acts of social cruelty, believing that it will increase their status. These researchers also found that, contrary to what students believe, bullying does not improve popularity.

This new research has important implications on how bullying and intolerance are addressed. Attention needs to be focused on the 85% who stand by, providing effective responses when they see someone getting bullied or teased. They need to be taught why and how to speak up.

Addressing the Links Between Bullying and Sexual Violence and Risk Factors for Suicide
According to the Center for Disease Control & Prevention, researchers are studying a new theory, the Bully-Sexual Violence Pathway, which examines the possibility that the perpetrators of bullying and anti-gay bigotry could eventually escalate to sexual violence. Although there is a difference between bullying and anti-LGBTQ teasing, an anti-bullying curriculum could include both, thereby addressing the small acts of hate that can escalate into more serious acts of hate, harassment and sexual violence. Changing attitudes that condone abusive and demeaning treatment of women can also be incorporated.

Not In Our School: Models for Change
The Not In Our School website provides interactive tools and films that showcase inspiring examples of students taking the lead in standing up to intolerance. Short films such as What Do You Say to That’s So Gay? and Students Take on Cyberbullying address gender-based bullying. These films are coupled with lesson plans for opening dialogue and taking action. The entire set of NIOS resources is also available in the NIOS Video Action Kit.

In our newest PBS film Not In Our Town: Class Actions, a middle school student described what had changed for her after the NIOS anti-bullying initiative that reached 50,000 students following two suicides of local youth in Lancaster, Calif., “The phrase ‘not in our school’ means a lot more now, sometimes people could be bullying some other people and the people around them will say ‘not in our school, not in our school.’ And they’ll just be like, ‘What?’ And then they will just stop. The phrase has really helped out a lot.”

A simple starting point can be identifying teaching students ways to intervene to stop the use of hurtful language like fag, ho, slut and racial epithets. Efforts to build empathy and involve students in the change process can shift the school culture to one where it is not seen as cool to offend or hurt another either in person or online.

To quote researcher Robert Faris, “Not In Our Town documents the good that can happen when people face the problems in their communities. Research has long shown that the more people who witness an incident, the less likely any one of them is to intervene. These stories provide powerful counterexamples to that tendency, and demonstrate that these seemingly intractable problems of intolerance and cruelty can be solved when people have the courage to stand up.”