Executive order on preventing violence against women and girls globally 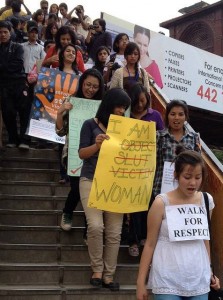 Recognizing that gender-based violence undermines not only the safety, dignity, and human rights of the millions of individuals who experience it, but also the public health, economic stability, and security of nations, it is the policy and practice of the executive branch of the United States Government to have a multi-year strategy that will more effectively prevent and respond to gender-based violence globally.

The impact of prioritizing preventing and responding to sexual violence and domestic violence, is to create a world that is healthier and safer.

Photo of “Walk for Respect” – Kathmandu, Nepal from Flickr user Say No – UNITE under Creative Commons 2.0.