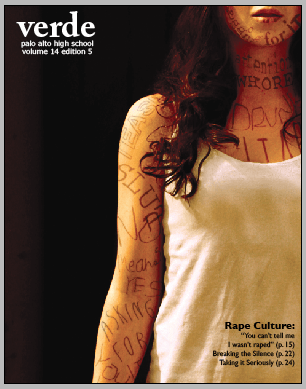 The April 9, 2013 issue of the Palo Alto High School paper Verde focused on rape culture. Articles included titles such as You can’t tell me I wasn’t raped, Breaking the silence: We need to change the way we think about rape and  Taking it Seriously: Ever made a rape joke? This column is for you.

Mary Elizabeth Williams in Salon applauded the how these high school students covered issues about sexual violence better than the mainstream media:

In a bold and powerful series in the April 9 issue of Verde magazine, the students of Palo Alto High have made a dialogue for and by teenagers about the state of rape culture and contemporary adolescence – and they’ve given a lesson to parents and educators alike. It’s a fascinating work, and a model for exactly what far more high schools and colleges across the country should be doing right now. Confront the problem. Examine it. Talk about it.

Thanks to the Palo Alto High School students for this issue.