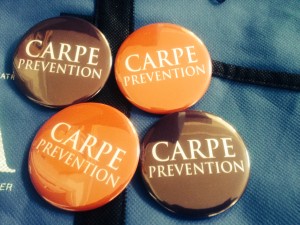 Carpe Diem is Latin for “Seize the Day.” At last week’s Association for the Treatment of Sexual Abusers (ATSA) 32nd Annual Research and Treatment Conference in Chicago, many of us were wearing buttons to “Seize Prevention” in recognition that prevention is key approach to end sexual violence.

While the most of most of the workshops dealt with the latest research and best practices in working with sexual abuse offenders, prevention was also a key theme. Opening day plenary speaker CureViolence’s Gary Slutkin challenged the audience to consider violence as a contagious disease.  His approach (which has been used in Chicago to reduce gun violence as documented in the film The Interrupters) has three steps 1) Interrupt transmission, 2) Identify and change the thinking of highest potential transmitters, and 3) Change group norms.  This discussion continued later that evening when Interrupter Eddie Bocanegra shared his insights on creating change in the community.

I attended a pre-conference institute lead by Paul Schewe, Director of UIC’s Interdisciplinary Center for Research on Violence on  promising practice in the primary prevention of sexual violence. (PreventConnect recorded a podcast with him that will be released later.)

Thanks to the ATSA Prevention Committee who distributed the Carpe Prevention button and developed a document on framing ATSA’s work as prevention. The fundamental goal of ATSA is in its tag line: making society safer.  Together we are working to prevent sexual violence.