Time to change culture: A renewed call to action to end rape and sexual assault 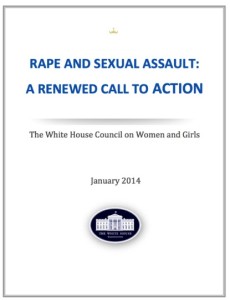 Yesterday President Obama and Vice President Biden spoke out against sexual violence as the White House released a report titled Rape and Sexual Assault: A Renewed Call to Action.  The report calls for action in many areas include preventing sexual assault on campuses and in the military as well as make improvements to how we response to sexual violence.
However, in order to prevent sexual violence it will take more than improving responses after rape happens.  Below are President Obama’s words about creating change in our culture:

You know how long it took for our country to get to where we are now.  And it didn’t just take new laws.  It took a fundamental change in our culture — a shift in our attitudes about how we think about sexual violence, and how much we value the lives and dignity of our wives and sisters and daughters and sons.  And over time, we’ve become a better, stronger nation for it.But now it’s up to each of us — every single one of us — to keep up that momentum.  We’ve got to keep teaching young men in particular to show women the respect they deserve and to recognize sexual violence and be outraged by it, and to do their part to stop it from happening in the first place.  During our discussion earlier today, we talked about I want every young man in America to feel some strong peer pressure in terms of how they are supposed to behave and treat women.  And that starts before they get to college.

So those of us who are fathers have an obligation to transmit that information.  But we can do more to make sure that every young man out there — whether they’re in junior high or high school or college or beyond — understand what’s expected of them and what it means to be a man, and to intervene if they see somebody else acting inappropriately.  We’re going to need to encourage young people, men and women, to realize that sexual assault is simply unacceptable.  And they’re going to have to summon the bravery to stand up and say so, especially when the social pressure to keep quiet or to go along can be very intense.

I appreciate the call to action for prevention from this country’s leaders.

What are you going to do to prevent sexual violence?