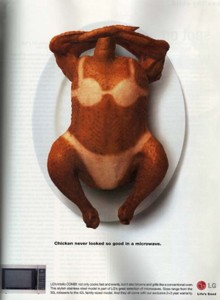 After that title, do I have your attention?

I love making connections, especially when it means looking at how to prevent violence against women in some of our most common daily behaviors.  That’s why I was thrilled when Masculinities 101 asked me to write about topic of meat and masculinities last year.  After all, what’s more common a daily behavior that what we eat?  And in so many way, what we eat and all that is hidden behind and around it powerfully and frequently promotes norms that shape our behaviors.  As I wrote in my guest blog post:

Unfortunately, these messages work.  Studies increasingly confirm the gender norms associated with meat eating.  For example, researchers at Bellarmine University in Louisville, Kentucky found that men in their study linked meat eating with manhood, power, and virility.   Another study at the University of British Columbia found that vegetarian men were seen as less macho (and “wimps”) compared to those men who eat meat – even by non meat-eaters and women.  This is particularly troubling given the very real connection between meat consumption and negative health outcomes for men, such as heart disease.  Yet again, just as we see with other violent and aggressive behaviors, that which is considered manly is that which actually harms men.  Moreover, given the realities of situations like food deserts and health disparities, these messages, easy to brush off as routine sexism, have very real consequences for men in marginalized communities.

So what are those messages and what else hides behind meat consumption and sale?  Read more here and add your thoughts in the comments below.