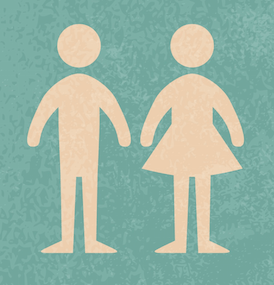 A new study out of Portugal confirms what many sexual and relationship health promoters, various curricula, and other U.S. and British studies have asserted: forcing young people to adhere to gender norms hurts their health.

In an observational study of 14 year olds, Maria do Mar Pereira, deputy director of the University of Warwick’s Centre for the Study of Women and Gender, observed girls restricting their behavior so that they could appear “more feminine” (i.e. avoiding physical activity and putting themselves on diets) and boys facing pressure to behave in ways that proved “their manliness” (i.e. fighting, drinking unhealthy amounts of alcohol, suppressing emotions).  The study concludes that:

…this constant effort to manage one’s everyday life in line with gender norms produces significant anxiety, insecurity, stress and low self-esteem for both boys and girls, and both for ‘popular’ young people and those who have lower status in school.

And, surprise, surprise – the teens studied did not like that they were expected to follow these gender roles. In an article about the study, Pereira recalls sharing the results of the study with the teens. They were shocked! Learning that their peers felt the same way and were also performing based on gendered expectations, their behaviors changed. They stopped mocking each other for not filling the expected gender roles, there was less fighting, and more.

In addition to the obvious link between gendered norms and sexual and domestic violence, this study also suggests something positive – we can do something to change harmful norms around gender. As Pereira pointed out in an interview about the study:

Sometimes adults think it’s impossible to change gender norms because they’re already so deeply entrenched. But they’re much more entrenched in adults than they are in young people…It’s actually fairly easy to reach young people if you create opportunities for discussion, if you get them to think about their own experiences.

Read another article about the study here.

Read more about the study in the resultant book A negociação do Género em espaço escolar (Doing Gender in the Playground: The Negotiation of Gender and Sexuality in Schools).