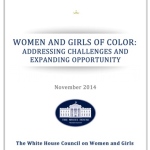 “When addressing the challenges women and girls of color face – challenges that often lie at the intersection of race and gender – we often fail to fully acknowledge, and account for this complexity.” – White House Council on Women and Girls

The White House Council on Women and Girls recently released the report, Women and Girls of Color: Addressing Challenges and Expanding Opportunity. The Report provides a detailed narrative of progress and challenges that women and girls of color face in addressing education, economic security, health, violence against women, and criminal and juvenile justice.

Some highlights from section on Violence Against Women:

This Report amplifies conversations that communities of color have on a daily basis across the country. To address existing barriers and disparities, the Council is convening a Working Group of White House and across federal agencies, policy staff with experts, leaders, advocates from outside the government on Challenges and Opportunities for Women and Girls of Color.

To read the full Report: