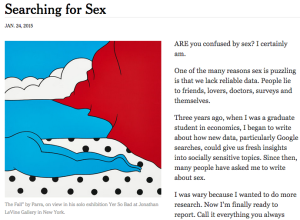 No, I’m not referring to the movie (which is great, by the way) or the song (which is likely now stuck in your head). I’m talking about new data about sex that was just released in the New York Times. Economist Seth Stephens-Davidowitz spent years analyzing Google searches and has just released the results – results that say a lot about norms around sex and gender.

While the first section discusses basic and clinical information about sex, sexual and domestic violence prevention practitioners will likely be most interested in the information following the “Not Getting It” graphic. Limited in that it takes a binary (men/women) approach, the remaining content explores many gender norms that most certainly contribute to gendered violence, but that I don’t think we often address. And what’s more, they are from social research, which tells us about popular opinion.

I don’t want to spoil the surprise, so take a look at the information and leave your insights about how you can use it to prevent sexual, domestic, dating and related forms of violence!