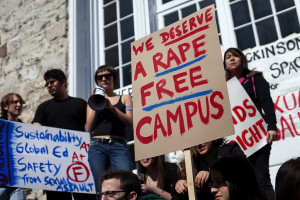 I attended the U.C. Berkeley Sexual Assault Conference last week as a presenter.  It was nice to be included and to see that there were representatives from community based rape crisis and domestic violence programs there, as well.

I presented on the CALCASA Student Summit conducted last year.  The goal of the summit was to ensure that the dialogue about how to address sexual assault on college campuses included a range of students with a variety of identities and experiences. That summit culminated in a report that outlined students recommendations regarding how their needs can be addressed.  However, It has been clear that while some student voices are highlighted and provided with access to important tables, many students still remain at the margins of the discussion.

In an article, Enough is Enough; Schools Must Take Rape Survivors Seriously, Sophie Karasek, discusses the reasons why she, and other students, feel that the nominal inclusion of only a few student voices is simply not enough.  She identifies the lack of attention on survivor stories and very little improvement in the day to day practices of how her school, U.C. Berkeley, addresses issues important to student survivors.

While we have seen some improvement in how schools are handling these issues, it’s not enough.  Student survivors continue to shout, as they remain unheard, their stories brushed under the rug.  Too many times their willingness to come forward even brings an experience retaliation.

A plenary speaker at the conference, David Lisak, discussed the new documentary The Hunting Ground.  There seemed to be a bit of discomfort in the room as the audience of primarily university administrators and staff, were familiar with the content. The Hunting Ground, a documentary that is currently being screened in various parts of the country, highlights the stories of students who continue to battle their schools on this issue.  Story after story highlighted the brushing under the rug, mishandling and retaliation that survivors have experienced while trying to come forward and seek out support after their assault.  Five schools in California are named in the film.  U.C. Berkeley is one of them.

The point here is, that while schools try to find ways to do better, they aren’t there yet.  In the meantime, they need to be sure to include voices that can truly challenge their traditional ways of thinking.  Bring in those students with diverse ideas.  Pay attention to those voices that challenge the status quo.  Isn’t that what education is about anyway? Learning new ways of thinking and challenging ourselves to do better?  Do Better.  Students expect it and deserve it.