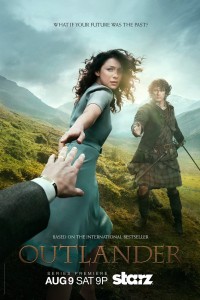 Raise your hand if you, like me, love Outlander! Or have heard of it…or plan to love it…or… Regardless, have you heard about the rape scene? Cause there’s an intense one in the 1st book that the new Starz show just portrayed in the last two episodes of season 1 (which wrapped up last Saturday). At first I was annoyed that none of “us” were talking about it. I’m a big fan of tapping into pop culture in our prevention efforts, so why was I hearing so much about it from entertainment news and television critics, but not sexual violence experts? I was also bothered by what I was seeing on social media – everyone kept referring to the scene as the most horrible, awful thing ever. It sounded like everyone was saying it’s “horrific” because it happens to a man, supporting the notion that it’s more “normal” for women to be raped –which happens ALL THE TIME on TV. Despite all of that, yesterday I realized something – this is actually about prevention.

The media’s been comparing Sansa Stark’s rape in Game of Thrones to Jamie Fraser’s rape in Outlander as if this is a contest for who can portray rape better. In following all of this, however, I realized that this is about actors, directors, writers – the entertainment industry – as preventionists. Sure, they’re experts at their crafts and, likely, not sexual violence. But we ask entertainers to stand up for our causes all the time. And they do. Sam Heughan, the actor who plays Jamie Fraser, tweeted the RAINN helpline when the most recent show aired. Both he and his co-star, Caitriona Balfe, vocally and visibly support causes and charities. They care, and while I’m sure we could ask them to make a PSA about sexual violence, it’s almost better that they infused sexual violence prevention directly into their work.

Outlander’s director, Ron D. Moore, has frequently explained the extensive preparation the actors did to make sure they played this rape scene responsibly, ethically, and authentically. That takes courage and an enormous amount of care and commitment. Their craft, their industry, is one that sends messages and sets standards (social norms). To do the best is the only accountable way to approach such material. We in sexual violence prevention, and many other social justice causes, are always looking to engage “people of influence.” It’s an evaluated strategy. Yet when we turn to pop culture, we tend to only focus on youth and shows made specifically for them. Sure, I bet a lot of young people watch shows like Outlander and Game of Thrones, but what about the rest? Outlander is well known for its strong, exuberant, following of adult women. They deserve these messages too. And why not ask folks to support sexual violence prevention through what they do best, like acting?

And here’s why I especially think Caitriona Balfe, Sam Heughan, Ron D. Moore, and the countless others responsible for Outlander are, indeed, preventionists in their own right: they are changing the industry. We call this “systems change.” In an industry where the Game of Thrones rape portrayal is the norm, what could we have expected before Outlander? Can we really hold the actor who plays Sansa Stark to task for not changing the script? Do we really think she has the power to do that in Hollywood? Because of Outlander and its stars taking the first and courageous step, maybe we can start expecting more of the industry. I for one am going to be pointing to the show every time someone tells me, “that’s just the way it is.” Because it’s not. We can do better and Sam, Caitriona, Ron, the writers, and the entire Outlander team are the preeminent example.