Today, Netflix will release a new documentary titled Audrie & Daisy  that is already making it’s debut across the country including at the Sundance Film Festival and in special premieres for high school students. Nothing will feed my social justice soul more than the spark of conversation that I hope and anticipate this release will provide for discussions around sexual assault. The movement to end sexual violence has been gaining momentum in the media and this documentary is sure to add to that movement. Similar to the release of The Hunting Ground, Audrie & Daisy will be a proponent and catalyst for action. Unlike The Hunting Ground, Audrie & Daisy places its lens in the world of K-12 campuses and communities, and chronicles a new generation facing issues of sexual violence in the age of social media.

Audrie & Daisy tells the story of  two teenage girls on opposite sides of the country that were sexually assaulted. The documentary pieces the stories together from a multitude of voices including survivors Daisy Coleman and her friend Paige Bourland. Audrie Pott’s 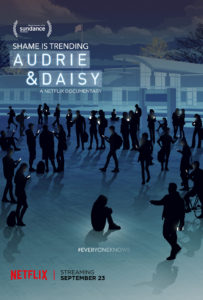 story is woven together by her social media account, her mother, father,  friend, and the accounts of the perpetrators themselves. An unstoppable force in storytelling makes a brazen debut in the documentary, that is social media, and cell phone-based communications in the lives of Audrie and Daisy. Nothing is more striking than the account of harassment and consistent denial of trauma experienced by the two teenagers channeled through cyber attacks. I had the chance to see Audrie & Daisy this week. What struck me the most was Sheriff Darren White of Maryville, Missouri, where Daisy’s assault took place. His covert victim blaming was perpetuated by suggesting that there is a “fatal flaw” with our society because we always blame boys: “It’s not always the boys. The girls have as much culpability in this world as boys do.” Oppression perpetuated by a white male in the seat of authority has been dauntingly common, and far too often themes of victim blaming, survivor trauma inflicted by peers, and invalidation by one’s community is recurring and unyielding as the documentary suggests.

Now is the time for a national conversation on preventing sexual violence. We all must come together to take action and create comprehensive efforts to create social change and support survivors on college and K-12 campuses, in the workplace and in our communities. Earlier this week the White House released new Title IX guidance for K-12 schools that included language around prevention. New legislation in California requires that 7th through 12th grade students receive education on sexual harassment and assault. We are seeing significant progress and still more work is necessary. As we watch Audrie & Daisy we must ask what role bystander intervention, affirmative consent, comprehensive sex education and other prevention strategies could play in preventing this violence. There is no doubt people will be moved by this documentary, but how can we leverage the attention to broaden conversations around prevention?

I’ll be eager to witness Netflix’s release of Audrie & Daisy, and look forward to the discussion and accounts of ALL viewers. The conversations, topics, themes and questions that this documentary will ignite will surely add to the flame, and heat up the conversation that the nation has been consistently having to face. I would urge and encourage all who are able to watch the documentary and invite someone else to join them.  Futures Without Violence has created discussion guides for screenings, parents, educators and professionals to help bolster these conversations and Docs for Schools has also created a comprehensive  Teacher’s Guide. Sparks of meaningful and necessary conversations are some of the best results from a documentary like Audrie & Daisy. For those of us working to end sexual violence, this documentary can yield meaningful results. If the national response to The Hunting Ground provides any indication, I imagine Audrie & Daisy will have a important impact in the continuous work to end sexual violence.