Sexual and domestic violence often intersects with other forms of oppression and hate violence, often encountered and experienced by those individuals with multiple marginal identities such as the lesbian, gay, bisexual, transgender, queer (LGBTQ) and HIV-affected people. Hate violence is manifested through physical violence, verbal and street harassment, sexual violence, and discrimination, and other forms of abuse. Unfortunately, multiple identities such as gender, sexual orientation, racial, ethnic, and immigration status, uniquely impact how LGBTQ and HIV affected survivors experience hate violence and their experiences seeking help and support. With the one year anniversary of the Orlando Pulse nightclub shooting this week, the timely release of this report only seems relevant. 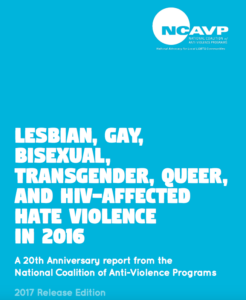 A program of the New York City Anti-Violence Project (NCAVP), the National Coalition of Anti-Violence Programs (AVP) just released the most recent report, the 2016 Report on LGBTQ and HIV-Affected Hate Violence. In 2016, out of 1,036 survivors of hate violence that reported to 12 NCAVP member programs about their experiences, there was a total of 77 hate violence related homicides of LGBTQ and HIV affected individuals recorded by NCAVP. These included the 49 lives lost in the shooting at Pulse nightclub in Orlando, Florida. 2016 was recorded being the deadliest year for the LGBTQ community,

The statistics and the experiences shared in the report are alarming and troubling! We need to urgently find ways to shift the culture and prevent hate violence and other intersectional forms of oppression against the LGBTQ and HIV-affected people.  The report highlights key protective factors for preventing hate violence, out of which few are highlighted here:

To summarize, shifting the culture and preventing hate violence is possible when we recognize historical systems of oppression, support community-based initiatives for healing and trauma-informed spaces, and most importantly, creating a culture that is affirming, inclusive and representative of LGTBQ communities.