“When an alarming 81% of women and 43% of men across the country face sexual violations that cause them pain and prompt many to alter their lives in significant ways, we must do more to stop and prevent sexual assault and harassment earlier.”

Measuring #MeToo: A National Study on Sexual Harassment and Assault examines the prevalence, characteristics, and location of sexual harassment and assault in the United States. The findings of this survey are not just on victimization, but also on perpetration behaviors and being accused of harassment and/or assault. 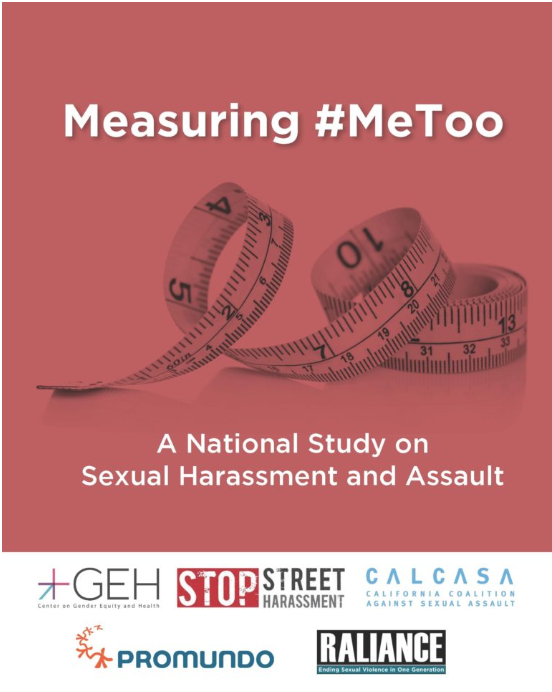 This survey not only provides crucial statistics on the prevalence and location of various types of sexual harassment and assault, it also discusses the disproportionate impacts on women, people of color, LGBTQ+ people, people living below the poverty line, and people with disabilities. The report also highlights perpetration behaviors, and, regardless of if someone says they perpetrated or not, if they have ever been accused of harassment or assault. The report states that identifying oneself has having committed harassment or assault is extremely low, and the percentage of people who have been excused is even lower. The study confirms what other statistics and reports have stated and what survivors, advocates, and preventionists have known: false accusation is incredibly rare, and sexual harassment and assault are greatly underreported.

This report has several implications for prevention. First, prevention efforts should look at a spectrum of behaviors from verbal sexual harassment to sexual assault considering the negative impacts all sexually violating acts can have on victims, survivors, and communities. Second, prevention should begin early and occur frequently, and should focus on changing cultural norms to ones that promote looking out for each other, intervening when something isn’t right, and holding those who commit sexual harm accountable, especially those in positions of power. Believing survivors, stopping victim-blaming, and promoting positive bystander intervention behaviors are examples of how to the current culture is changing.

Finally, in order to prevent violence before it occurs, more needs to be known about those who commit sexual harassment and assault. This can be difficult work, but it is also not impossible as organizations such as the Ahimsa Collective have already begun learning from perpetrators. Sonya Shah of the Ahimsa Collective shared findings from listening sessions with perpetrators on a recent PreventConnect web conference “Adult Survivors as Movement Leaders: Lessons Learned from the Just Beginnings Collaborative.”