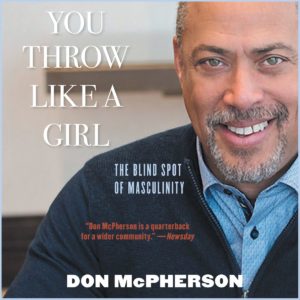 “How do we raise boys to be whole men without degrading our daughters in the process?” asks Don McPherson in his newly released book You Throw Like a Girl: The Blind Spot of Masculinity.  This former National Football League and Canadian Football League quarterback proceeds to explore how to do speaking not only as a man, as an African American and as an athletic, but as a person dedicated to preventing gender based violence. McPherson tells his story of becoming and being a prevention practitioner.

The book’s title is a common insult from men to other men.  In these pages, McPherson calls to men to explore what they can become. He insists that “we should be asking more what boys and men can become and asking less what they should or shouldn’t do.”

Drawing on his experiences as a boy, as a son, as an athlete and as person working to prevent men’s violence, he provides many examples of how to challenge men to move away from sexist, homophobic and misogyny.  Similar to what another Syracuse University football star Joe Ehrmann wrote in his book InsideOut Coaching, McPherson demonstrated how sport can go beyond reinforcing negative and destructive male norms, and help shape positive behaviors.

He credits those whom have help teach him, from Mentors in Violence Prevention founder Jackson Katz, to Oakland Men’s Project development of the “Act Like a Man Box” to his father’s examples of loving his family. I was moved by his stories of how he learned to be a man from our culture, and how he had to relearn how to become the man working to be a healthy man actively engaged to prevent men’s violence.

We need more examples like Don McPherson of how to work to create a world without violence.

Check out RALIANCE’s Sport + Prevention Center on strategies to engage sport to be part of the solution to preventing sexual and domestic violence.