How we ask about sexual violence and intimate partner violence has a great impact on the results. This month, the Bureau of Justice Statistics with the U.S. Department of Justice released its 2020 National Crime Victimization Survey (NCVS) results. Since NCVS is not the only national survey that includes sexual and intimate partner violence statistics, advocates and preventionists should pay attention to the difference between NCVS and other surveys, such as the Centers for Disease Control and Prevention’s National Intimate Partner and Sexual Violence Survey (NISVS).

NCVS and NISVS both rely on survey participants’ own accounts of the violence they experience, commonly referred to as self-reported data. However, the two surveys ask about different types of violence. NCVS includes physical forms of sexual and intimate partner violence, including attempted acts of violence. NISVS includes a wider spectrum of abusive behaviors including physical and non-physical sexual and intimate partner violence. Non-physical forms of violence included in NISVS are non-contact unwanted sexual experiences (i.e. verbal/online sexual harassment), stalking, and psychological aggression. Including non-physical forms of sexual and intimate partner violence paints a bigger picture for public health and prevention, especially when it comes to counteracting harmful norms that dismiss some abusive and violating behaviors as “normal.” It’s especially important during the COVID-19 pandemic as many have reported an increase in verbal and online sexual harassment. Other surveys such as the The Facts Behind the #MeToo Movement: A National Study on Sexual Harassment and Assault also include a wide range of assaultive behaviors. 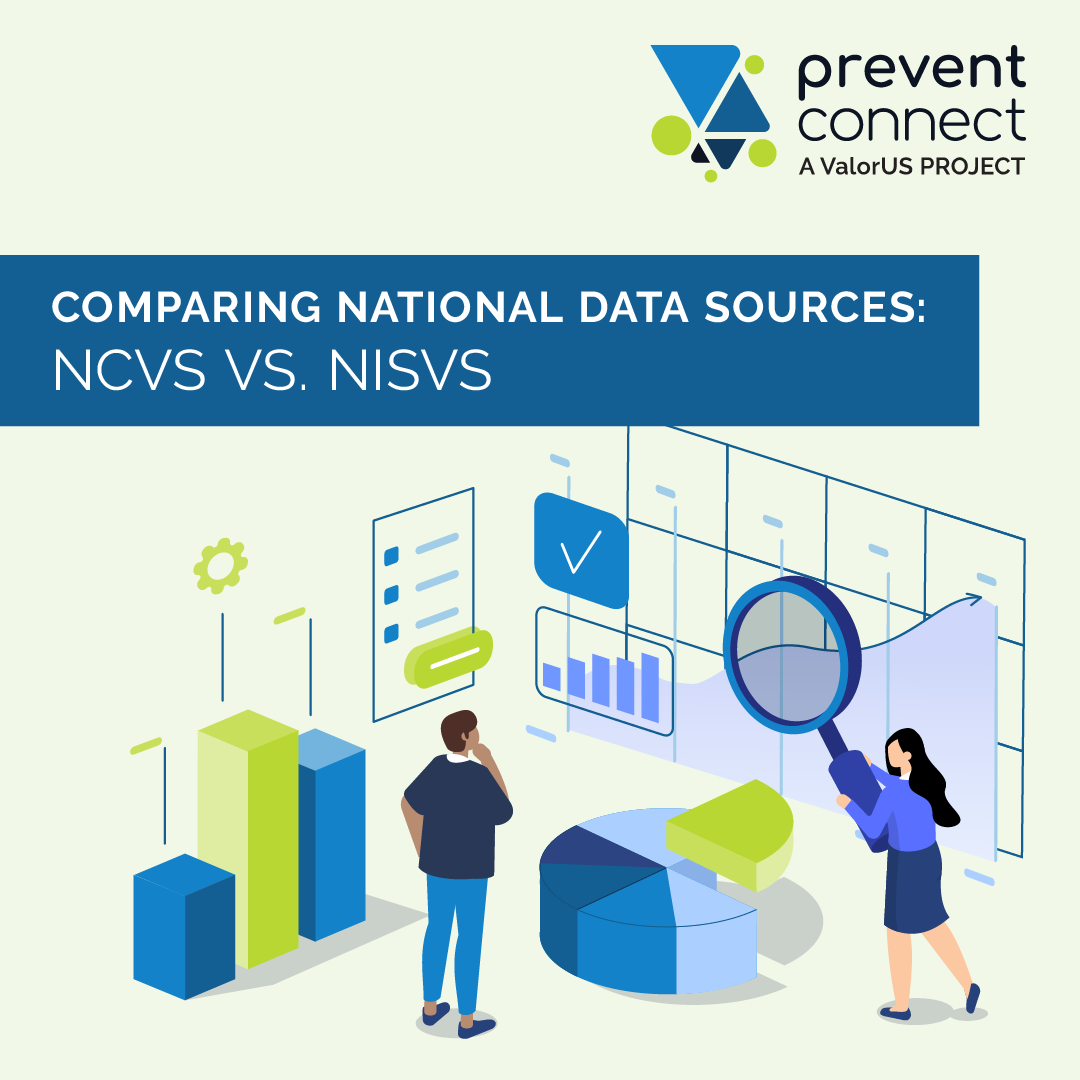 NISVS frames their survey questions as, did someone do this specific action to you?, where NCVS frames their survey questions as, did you experience this crime?. For example, NCVS asks survey participants what crimes they experienced starting with what was stolen. NCVS then asks about any type of attack before asking if “has anyone attacked or threatened you in any of these ways…any rape, attempted rape, or other type of sexual attack?” NISVS’s questions are behaviorally-specific questions, meaning they are a description of a behavior or set of behaviors. NISVS asks more descriptive questions about what has happened without labeling it as a crime or rape. NISVS asks about different types of sexual and intimate partner violence, such as “How many people have ever used physical force or threats to physically harm you to make you have vaginal sex?” Asking survey questions in the way NISVS does creates more clarity for the survey respondent, the data team, and the public reading the report because the question is so specific, there is little room for misinterpretation, bias, or differing definitions of violence to cast doubt over the data.

At the beginning of the survey, the NCVS prompts their survey participants to remember crimes that they have experienced. Some people struggle to identify an experience of sexual violence or intimate partner violence as a crime for many reasons. Often sexually or physically abusive behavior is considered as “normal,” while what are considered more severe incidents may be seen as “criminal.” What is considered a crime within sexual and intimate partner violence varies state-by-state. An example of this would be sending unsolicited nude photos: while some states may consider this a crime, others do not, and people in general may consider this type of sexual harassment “normal” because it may not be considered as severe as rape, but is still violating and harmful.

NCVS found a decrease in victims of intimate partner violence reporting to law enforcement from July 2019-November 2020. There are many reasons why police reporting of intimate partner violence declined recently. The COVID-19 pandemic amplified barriers to accessing survivor supportive services after contacting law enforcement. The racial justice uprisings of the summer of 2020 refocused national attention on the ways law enforcement can often bring more harm than good, and death in many cases, especially for Black communities and communities of color. This data can inform prevention and survivor support systems that seek solutions outside of policing and the criminal justice system. Community-driven approaches to preventing and responding to sexual and intimate partner violence are a valid option.

It’s also important to note that according to the 2020 NCVS, rape or sexual assault did not decrease from July 2019-November 2020 as compared to earlier NCVS reports. This survey period includes the beginning part of the COVID-19 pandemic in the U.S. There is a common myth that since bars, clubs, schools, campuses, and other social environments were shut down in the early months of the COVID-19 pandemic, that sexual violence would go away like the virus would with these safety measures. However, the reality is quite different. The pandemic has illuminated and exacerbated many risk factors for sexual and intimate partner violence while jeopardizing protective factors for prevention. The NCVS report reflects what survivors have expressed for the past year and a half: social distancing prevents COVID-19, not sexual violence, and prevention should remain a priority.

While the NCVS can provide a more frequent snap shot of sexual and intimate partner violence rates as crimes in the United States, the NISVS provides more comprehensive information about sexual and intimate partner violence as survivors experience it. Check out the resources below for more information about these national surveys and implications for prevention: