The key to change? The feminist movement 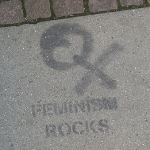 Recently published in the American Political Science Review, a new study onviolence against women conducted over four decades and in 70 countries reveals the mobilization of feminist movements is more important for change than the wealth of nations, left-wing political parties, or the number of women politicians. (SF Gate)

… in feminist movements that were autonomous from political parties and the state, women were able to articulate and organize around their top priorities as women, without having to answer to broader organizational concerns or mens’ needs. (SF Gate)

What helps and inhibits your work as a member of the feminist movement?