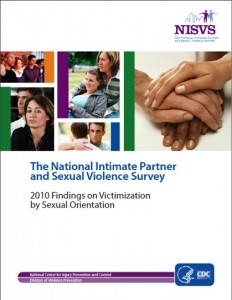 These findings underscore the broad range of violence experienced by LGB individuals in the United States and reiterate the important need for immediate, but thoughtful, actions to prevent and respond to the violence occurring within LGB populations. A more comprehensive plan for violence prevention that includes LGB individuals is needed to address issues that include effective prevention efforts focused on intimate partner violence, sexual violence, and stalking. In addition, the inclusion of LGB persons in national violence research will assist in furthering a more comprehensive understanding of intimate partner violence, sexual violence, and stalking.

The report makes several specific recommendations to “ensure that prevention and intervention resources be available for these groups [lesbian, gay and bisexual people] at commensurate levels to those available for heterosexual populations.”

…it was clear that among women who experienced rape, bisexual women were more likely to experience their first rape between the ages of 11 and 17 years, as compared to heterosexual women. Many people may not identify their sexual orientation during their adolescence, making it difficult to target specific subgroups of adolescents for prevention, further strengthening the need for broad-based prevention efforts that include individuals as well as communities.

For more information about sexual violence and intimate partner violence in the LGBTQ communities, check out these resources released in 2012:

One response to “First federal study of violence among lesbian, gay and bisexual communities”