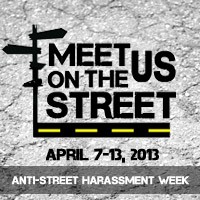 From people who shared stories about their first harassment experiences on twitter (#EndSHWeek) to sidewalk chalking in several cities to sharing images on social media, today many groups and people held important conversations about street harassment in our communities and with our friends.

The growing attention to ending street harassment demonstrates how grassroots activism is changing culture.  By demonstrating an intolerance toward actions on the street and encouraging people to be active bystanders to interrupt street harassment, we are also create new norms that can prevent sexual violence and domestic violence.