In the recently released study published in the journal Lancet Global Health, the researchers examined prevalence and factors associated with perpetration using data from interviews with 10,178 men from six countries in Asian and the Pacific.

The findings are disheartening: 24% of men committed rape against a partner or non-partner. (There was great variance among the countries ranging 11.1-60.7%).  In this research we hear from people who perpetrate rape themselves. Men who acknowledged that they had committed rape gave reasons for their actions:

Of those who had raped a nonpartner woman (but not a man or a partner), the most common reason for the most recent rape expressed sexual entitlement (statements endorsed by 73% of men across the region; table 2), followed by entertainment seeking (59%), anger or punishment (38%), and alcohol or substance use (27%; table 2).

The researchers also asked about the consequences of their action:

…only 55% of men had felt guilty, and 23% had been sent to prison for rape of a partner or non-partner woman, or man (table 2), but this proportion varied from 2% (Sri Lanka) to 52% (Papua New Guinea), where traditional rape punishments are used, with short-term detention by the police in prison until traditional preparations have been made.

While these samples are not nationally representative of those countries, nor able to be applied to the population, this provides  a stark picture of men who rape. Research exploring perpetration is necessary to understand how we can create change.

The researchers described the study as about “family and health” and. Instead of asking questions like “Have you ever raped someone? That asked behaviorally specific questions:

The word rape was not used in the questionnaire; instead, it was operationalised through responses to questions about specific acts. Two questions about nonpartner rape asked about having “forced a woman who was not your wife or girlfriend at the time to have sex” or having “had sex with a woman who was too drunk or drugged to indicate whether she wanted it”, and how often the male interviewees had committed such acts. Two additional questions asked about having done these acts with other men (multiple perpetrator rape).

For prevention practitioners, this type of research helps us understand perpetration in order to create prevention efforts that can make the necessary changes in communities that will contribute to preventing rape.

Partners for Prevention has posted data visualization graphics about this study here. Here is one of them: 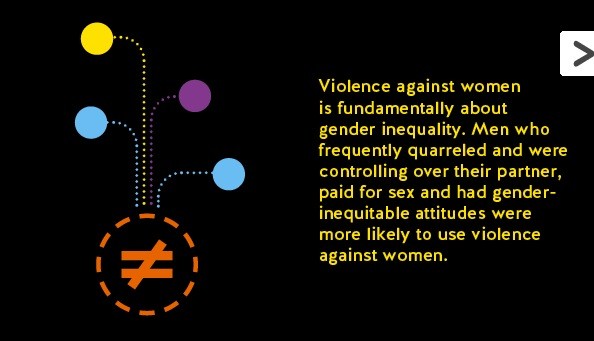 Here is the full citation of the study: