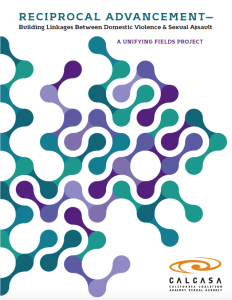 From a prevention perspective, I believe the solutions to ending domestic violence and sexual violence have more in common than are different – and we need to be attentive to the differences.  We need to promote respect and consent; highlight healthy relationships and healthy sexuality.  Gender roles must be transformed to promote gender equity as an important key step to preventing sexual violence and domestic violence. It will take a movement to create the social change necessary to live in a world without such violence.

This report was developed with funds through a project called Unifying Fields: Building Linkages Between Domestic Violence and Sexual Assault, funded by the Blue Shield of California Foundation.