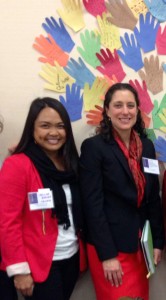 Two weeks ago CALCASA’s Executive Director, Sandra Henriquez and I attended the 2015 Women of Color Network (WOCN) National Call to Action Summit and Conference in San Diego, CA. Nearly 300 women of color and allies spent three days on the theme, “Coming Full Circle: Survivors and Communities of Color Leading the Way to Justice and Healing”.

Tonya Lovelace, WOCN‘s CEO, opened the conference sharing the history of WOCN that started in 1997 to “address the isolation and unique challenges of women of color advocates and activists within the violence against women movement.” Since then, WOCN has “created a national medium where women of color can dialogue, network, organize, and obtain training and resources to support their leadership development and advocacy efforts.”

The conference was filled with workshops that covered topics under advocacy, prevention, and wellness. Additionally, there were workshops on human trafficking/immigration, emerging issues, and survivor-centered. One of several sessions that I attended, “Walking in Balance in all Our Relations” led by Strong Oak Lefebvre and Mary Whelan shared an American Indian primary prevention bystander intervention curriculum that is based on Indigenous pre-colonization values. Strong Oak and Mary led us through a short version of the curriculum teaching modules (there are 12) that is facilitated by the “talking stick” and group leader.

One of my highlights was meeting the newly appointed White House Advisor on Violence Against Women, Caroline “Carrie” Bettinger-Lopez. Carrie demonstrated her clear commitment to communities of color addressing violence against women. I was impressed that she introduced herself to each and every person during the “Community Lunch and Meet and Greet”. Importantly, Carrie also shared tips on how to effectively do advocacy, to “get ears in the government”. One resounding tip is “come early, come often”, she stated that once we’ve identified the problem, we also need to be able to articulate what the problem is. She described how our work includes planting seeds by engaging early with our government representatives as well as becoming solutions-focused, by coming to the table with 2-3 solutions when we have 2-3 problems. In essence, Carrie encourages a solutions-based approach to violence against women in the short, medium, and long-term.

It was revitalizing to be around women of color (WOC) and allies all doing the work with passion, commitment, and through a strong lens of social justice in preventing sexual and domestic violence in our communities.