This is how we shift cultural norms to end rape culture 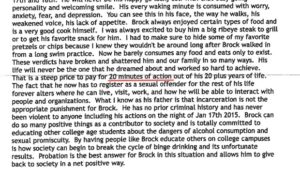 All of us are reading the headlines in the news and seeing messages on social media with the recent rape conviction and 6 month jail term for former Stanford University swimmer Brock Turner, the subsequent release of the powerful words in the survivor’s letter to the court about the sentencing, and the letter from Turner’s father describing the rape as “20 minutes of action.”

This is a moment that we must recognize where, yet again, sexual assault has taken the stage in the media and on the minds of the general public. The events on the Stanford campus and the subsequent court case have lead to a space for a survivor to share her voice, for system responses to be exposed and challenged, and to galvanize public outcry against sexual assault and gender-based bias.

This is how we shift cultural norms to end rape culture. We pull the issue out of the shadows so that a meaningful conversation can be curated. We leverage the opportunity to build capacity, educate stakeholders and the general public, and demand an end to sexual violence.