Raliance releases 2017 Ending Sexual Violence in One Generation: A progress report for the United States

Raliance is working toward ending sexual violence in one generation. While this may seem aspirational, profound changes toward this vision are taking place in our culture. To document and benchmark these changes, Raliance released today its latest report documenting the state of sexual violence in the U.S.

The report titled “Ending Sexual Violence in One Generation: A progress report for the United States 2017” builds upon Raliance’s inaugural 2016 report continuing to analyze progress in the movement to end sexual violence and how it is shaping public conversation and, 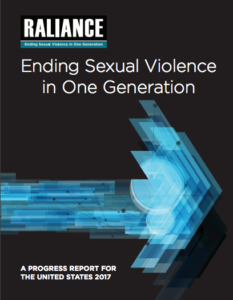 ultimately, our culture in how we address this important societal issue. While there is more work to be done, the key trends and examples identified in this report underscore that positive changes are underway and prevention is possible.

Raliance is a national partnership led by National Sexual Violence Resource Center, the California Coalition Against Sexual Assault-PreventConnect, and the National Alliance to End Sexual Violence and serves as the central hub for effective allocation and distribution of programmatic funding in sexual violence prevention and as the go-to resource for policymakers, advocates, service providers and the media. Raliance is funded through a $10 million multiyear commitment from the National Football League. The name was inspired by the entity’s intent to rally engagement from stakeholders and align goals and resources behind its overarching mission of putting a stop to sexual violence once and for all.