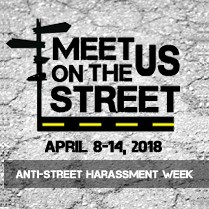 April 8-14 is international Anti-Harassment Week. This week activists will continue to build on the momentum of the #MeToo movement and rally against the issue of street harassment and elevate prevention strategies stop it.

Held during Sexual Assault Awareness Month (SAAM), Anti-Street Harassment week illustrates the need to stop the factors that allow gender-based violence and sexual violence to persist. According to a recent study by Stop Street Harassment The Facts Behind the #MeToo Movement: A National Study on Sexual Harassment and Assault verbal sexual harassment is the most common form of harassment. Street harassment happens multiple times for most people according to  Unsafe and Harassed in Public Spaces: A National Report on Street Harassment. Verbal sexual harassment can happen anywhere and this week we are focused on the street, one of the most public spaces people encounter every day.

What will you be doing for Anti-Street Harassment Week?