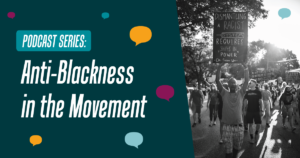 Darin J. Dorsey, series producer and Co-founder of Rooting Movements, said the series serves as a tool for organizations to better understand how they can better create a movement that addresses gender-based violence against all people, while following the lead of those most marginalized by systemic violence.

According to a recent Mother Jones article, How the mainstream movement against gender-based violence fails Black workers and survivors, racial hostility and workplace discrimination, as well as the overrepresentation of white women in leadership, are persistent trends in the “mainstream” movement to end gender-based violence: meaning nonprofit, largely government-funded advocacy, shelter and prevention programs.

The article provides multiple accounts of Black workers and survivors, explaining experiences of microaggressions, tokenization and discrimination, that lead to them leaving their workplace or the movement as a whole.

One interviewee goes on to explain steps for organizations to do better by their Black employees and clients: Hire, promote and recourse advocates of color, while not subjecting them to greater scrutiny than white counterparts and take accountability for the past.

Deconstructing decades of cultural norms and subtext is not a task done overnight, rather it is a continual process of hard work, vulnerability and bravery.

NSVRC’s Podcast Series, Anti-Blackness in the Movement, serves as a starting point for organizations and leaders within the anti-violence movement to confront anti-Blackness and create safer and more transformative spaces.

All Podcast guests are also available for consulting, training and technical assistance for organizations interested in increasing equity, inclusion and access in their workplaces.

All episodes will be featured, as they are released, on NSVRC’s landing page. The first episode, Anti-Blackness in the Movement: Darin talks with Michelle Osborne, is out now and available here, as well as Spotify, Apple Music and all podcasting platforms.