Reflections on the History of the Anti-Violence Movement

As a college student in the fall of 1982, I started to volunteer at a small community-based organization called “Men Against Domestic Violence.” Little did I know, this would start my lifetime calling to work to end gender-based violence. Over the last 40 years, we have witnessed many developments of this important movement to change our culture and communities. Today there is robust research literature on the topic and people have jobs dedicated to preventing violence, yet gender-based violence still persists at high levels. To understand how to improve our work in the future, we need to know where we came from. 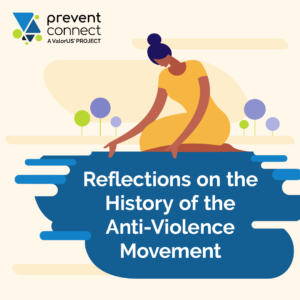 The article includes an account of Stein’s experience in 1978 in Massachusetts that led to early action on addressing sexual harassment in K-12 settings.  This eventually led to the first published interventions called, “Who’s Hurt and Who’s Liable: Sexual Harassment in Massachusetts Schools.”  Starting in 1979, the National Coalition for Sex Equity in Education (NCSEE) highlighted the problem of sexual harassment in K-12 schools by creating curricula, offering training programs for school staff, and administering small state-based surveys. These early efforts were influenced by earlier and contemporaneous efforts to identify and prevent sexual harassment in the workplace.

Surveys about student experiences of sexual harassment in schools were crucial to advancing this work. By the early 1990s, surveys by Seventeen Magazine and the American Association of University Women, provided valuable data to understand the problem and led to subsequent research and surveys that inform our understanding of sexual harassment in schools.

Stein and Taylor summarize the article:

“In the four decades since sexual harassment among K-12 students was first identified by feminist activists as an impediment to attaining equal educational opportunities, there has been research, the collection of survey data, creation of several efficacious classroom interventions, and some school wide interventions that have been shown to work. There has also been a plethora of federal lawsuits, including one in the US Supreme Court (Davis v. Monroe, 1999) which clearly established that school district employees are responsible for maintaining an educational environment free from SH and sex discrimination. There is ample data to show that if allowed to continue, SH can lead to violence in teenage relationships and escalation of homophobic attitudes Yet SH is still happening far too often.”

I find understanding our past helpful to plan our next steps to work towards a world free from violence. Thanks for this article in sharing some of the important history of our work.

David S. Lee is the Deputy Director at ValorUS® where he started PreventConnect, the nation’s leading online community to advance primary prevention of sexual and domestic violence.