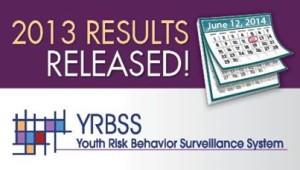 The CDC has released new data from the 2013 Youth Risk Behavior Surveillance (YRBS) System. YRBS is conducted every other year and provides data from middle- and high-school students across the country about a variety of risky behaviors, from riding bicycles without helmets to binge drinking to unprotected sex.  It also asks students about their experiences of physical and sexual dating violence.

Nationally, among students who had dated or gone out with someone in the past year, 13% of females and 7% of males had been hit, slammed into something, or injured with an object or weapon on purpose by someone a boyfriend or girlfriend. Additionally, 14% of females and 6% of males who had dated someone in the past year had experienced sexual violence such as unwanted kissing or touching or had been physically forced to have sexual intercourse at least once during that year.

The data shows that prevention efforts need to start early: about 1 in 6 females and about 1 in 18 males in ninth grade had experienced sexual dating violence. If we’re going to stop sexual violence perpetration before it starts, we clearly need to start changing social norms, bystander attitudes, and other risk factors before kids reach high school.