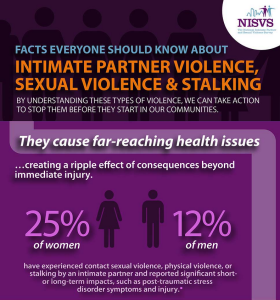 The new report contains similar findings to the previous NISVS data sets, which suggests that the survey’s measures are reliable.This information highlights the prevalence of sexual violence and is critical as we continue our sexual violence prevention efforts.

A few key findings from the report, which you will find are consistent with the 2010 NISVS data, include:

Findings from this report can be used to help demonstrate that sexual violence, intimate partner violence, and stalking create a considerable public health burden, and can help identify priority target populations for prevention. Specifically, the data confirms the importance of efforts that focus on preventing these types of violence against young people.