Use your soap box 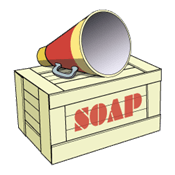 There is certainly good news about the changing face of the media. Social media and the internet offer many opportunities for accessing information, and this web conference series is a prime example of how technology and new forms of media are connecting people like never before. However, these new opportunities don’t come without their challenges. Our recent web conference titled “The Role of Media and Pornography” brought together two national leaders known for their expertise on media and pornography, and examined the ways in which new media and technology have transformed the pornography industry to the detriment of safer communities.

During the conference, presenter Cordelia Anderson (typically a co-host for this web conference series) highlighted the impact of current internet pornography in everyday lives. She explored how we can begin to use alternative images and messages that capture the joy, consent, and mutual pleasure necessary for healthy sexuality. Anderson’s presentation helped us see the need for a culture that doesn’t censor the healthy while marketing the harmful. We need a culture that nurtures healthy sexuality and normalizes caring connections rather than disconnection. This, she argues, is essential for building communities that don’t allow for the sexual abuse of children.

Building on this theme, presenter Dr. Sharon Cooper challenged the standard notion of “what you see is what you get.” Instead, she says that when it comes to media, “what you see is what gets you.” As a pediatrician, Dr. Cooper uses her time with patients and families as a way to start conversations with parents about the impact of media messages on their children, the importance of self-worth and respect, and ways to combat the growing sexual objectification of children — she refers to these education moments in her office as her metaphorical Soap Box, inviting each of us to do the same. One participant suggested that this could become the beginning of the SOAP BOX Campaign among pediatricians, while another creatively noted that SOAP is truly what Dr. Cooper was doing — “Speaking Out Against Pornography.”

As bloggers, we agree that it’s time for each of us to pull out our soap box — speaking out against abuse and objectification of children in the media and calling for models and images of healthy sexuality and relationships.