“Raliance operates under a belief that sexual violence is preventable. We believe that if it can be learned, it can be unlearned,” said Sandra Henriquez, Executive Director of CALCASA-PreventConnect. “We have set a bold agenda that will allow us to maximize this watershed moment in which the public’s awareness and outrage surrounding sexual violence is more heightened than ever before. Raliance believes that the moment to rally folks is today – not in the future, but now. We call upon each segment of society to join with us today, as we set about ending sexual violence in one generation!” 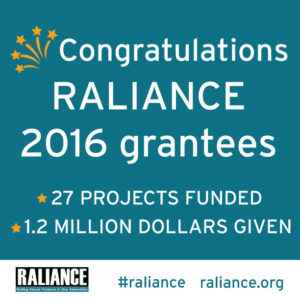 Today Raliance announced it will fund 27 projects totaling nearly $1.2 million in the first round of an ongoing grant program. The program seeks to advance promising, replicable practices or policies that 1) improve the response to victims of sexual violence; 2) reduce the likelihood of perpetration of sexual violence; or 3) strengthen communities’ and organizations’ capacity to create safe environments.  The application period for the second round of grants, totaling $600,000, will open on July 5, 2016.